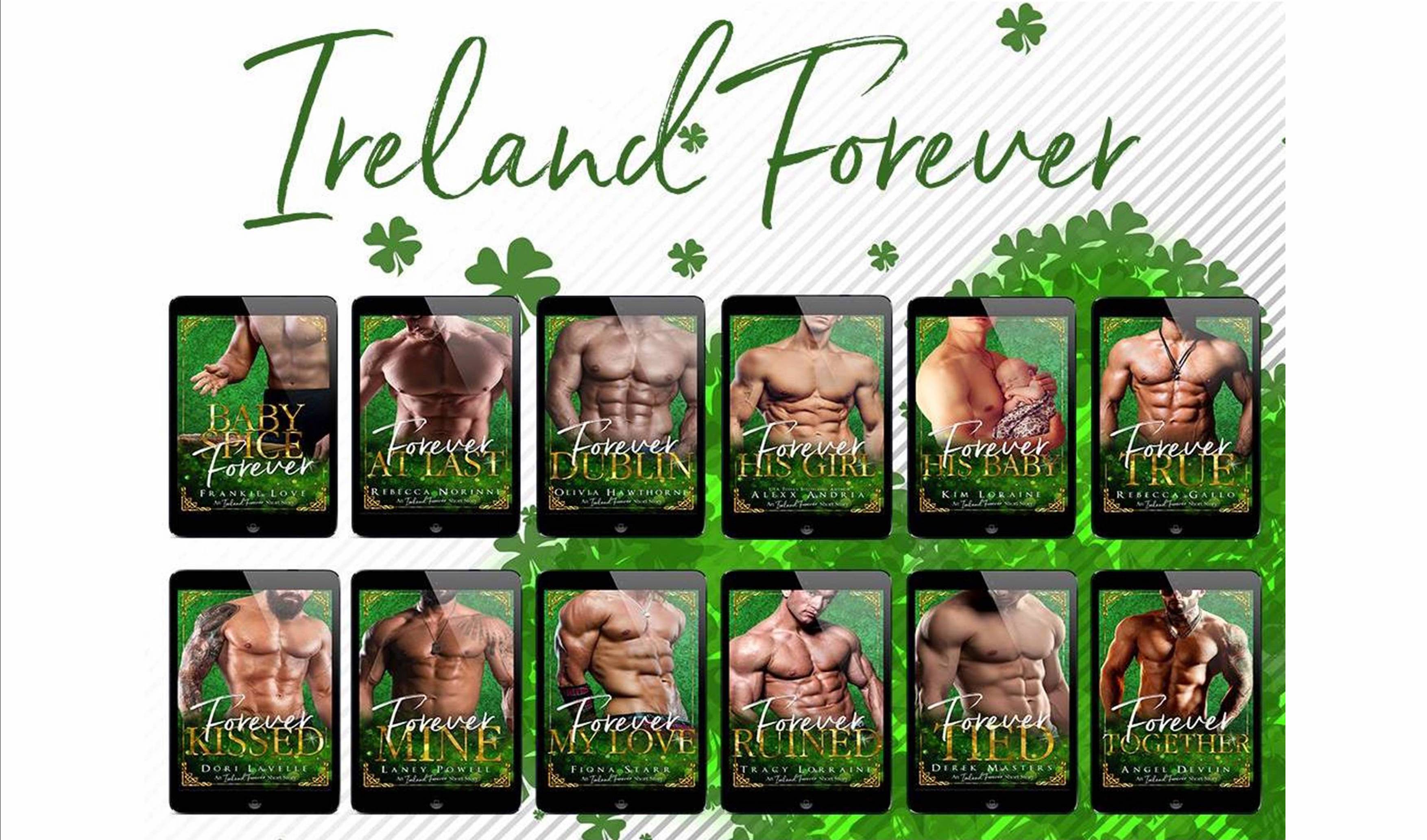 I have recently discovered this group of writers that put together collaborations of short stories. Until last month I had only read Tracy Lorraine's books, but I thought I'd give some of the others a go when I stumbled across them on Booksprout. I only read a few of the Matchmaker series, but this time around I decided I would give them all a try!

This month the Flirt Club authors have written a book each set in Ireland. The majority of the books revolve around a Blackthorne concert being held in Dublin. Whether the story is about the band member or fans attending the concert. What makes these books so unique are the crossover details from book to book, which is just amazing seeing as a different author has written each book. There is a character running through many of the books, called Janie, and she is the band's manager. She invites her friends to attend the concert, and in each of their rooms, she leaves a note and some goodies. I was really pleased that the note was the same in each book, as were the goodies she left. This has obviously been meticulously planned by the authors, and I love this attention to detail!

I have currently read nine of the twelve, but have the final three on my kindle to be read in the next few days! With them being short stories, you don't have to invest a lot of time, if you literally only have an hour to spare then these books are ideal! Some are better than others with my favourite so far having been Laney Powell's 'Forever Mine'. She managed to make the story very believable within the small word count; it was well-written and developed. See what I have thought of all the others below:

Forever Mine by Laney Powell

Declan: When I met Jynger Lyle, I assumed she was another one of the panty tossers that followed my band, Blackthorn.  I was wrong. She's the perfect girl for me - but I might have lost her before I ever had her. Good sex goes a long way, but I'll have to do better if I want to convince her to stay. I thought it would be a weekend fling... but love had other plans.

Forever His Baby by Kim Lorraine

I knew from the moment she walked into my pub, Emma Hartford was the woman I'd marry. Unfortunately, she is only in Ireland for a limited time, and I'm not the kind of man who'll settle for something temporary. But when I see her sitting alone on St. Patrick's Day, I know I can't let her out of my grasp. I'm going to sweep her off her feet and show her what it's like to fall in love with an Irishman. She'll be my wife, my love, and the mother of my children. Emma is my forever, and I'll prove it with a little luck on my side.

She ruined me for any other woman years ago, but my fears kept me from making her mine.  Cara deserves so much more than how I’ve treated her. Which is why, six months ago, she decided enough was enough and offered me an ultimatum: Commit or we were done.  I made the wrong decision, something I’ve regretted every second since I walked away.  When fate throws us together once again, I know it’s now or never. Before tonight’s band comes back for their encore, Cara is going to be mine. And this time, I’m never letting her go.

Forever My Love by Fiona Starr

She ran away before she got burned. He's been burned so badly, he's still hot about it. But when Madeline Blaze and Gerry Cosgrave meet, they light an inferno between them that neither one is prepared for. Can they tend their old wounds in order to re-kindle their hearts?

Seamus Black is my past, but memories of him refuse to give me permission to move on with my life. We met two years ago at one of the Blackthorn concerts. A lot has happened since then. My life has changed. My heart is damaged by all the pain I’ve been carrying. The only way I can move on is to find the man that started it all. When I arrive in Ireland, I’m shocked to find that Seamus is not the man I once kissed. And it has nothing to do with the beard. His heart, like mine, is shadowed by pain. He needs me as much as I need him. No, he needs me more. Can we find healing in each other’s arms or will our pain drive us apart?

Bay Harrington: Party, party, party! My life was one big party after another, with maybe a semester of school in between. I was the typical spoiled rich brat, I had money and looks and not a care in the world. When I went to Dublin, I expected to have a couple hot flings with hot men I didn’t know, then head back home and continue my studies. What I didn’t expect was to run smack dab into the arms of my former stepbrother and the man who crushed my heart. And what I didn’t expect was to find myself needing his help. And then needing him… Marcus O’Sullivan: It will be fun, they said. A couple guys from my law firm talked me into celebrating winning my first big case by taking a weekend away for a concert in Dublin. I figured I’d bang a hottie, hear some good music, and get back to the firm to keep working my ass off to make junior partner before I left my twenties. I never figured I’d run into the one girl in the world who could leave me speechless and full of frantic lust. And I didn’t figure that she would end up needing me as much as I’d always needed her.

Forever Together by Angel Devlin

Fergus: I'm known as much for my c**k as my rock. As the guitarist in Blackthorn, I have a reputation to uphold and as I put paid to my fourteenth PA, our Tour Manager, Janie pulls out the big guns. She sends in her best friend Harlow. A woman seemingly immune to my Irish lucky charms. Now all I can think about is her. Harlow: A week spent with the biggest rock band in the world right now? All I have to do is use my experience with five older brothers to keep Fergus McDermott in line and get him to the show on time. My best friend Janie has made me an offer I can't refuse. Then I meet him. His blarney is legendary, but then he shows me another side, a vulnerable one. Is it part of his seductive act, or does he really like me? I won't be number fifteen. Yet all I can think about is him.

Forever At Last by Rebecca Norinne

Gemma: When my fiancé left me for his secretary, I thought my life was over. Thankfully, my sister refused to let me wallow in misery. When she dragged me to Dublin, I never expected to fall for a sexy rugby player with the body of a gladiator and the heart of a gentleman. All I’d wanted was to get over my ex; I never meant to fall in love. Ross: For years I’d been the best fullback in the league, but an injury forced me to retire early. I’ve been walking around numb, wishing for something that would make me feel alive again. But when I met the brokenhearted beauty with a body made for sin, I wished for something different. Something that looked a lot like love.

I'll tell you what I want, what I really, really, want . Her. Only Her. She walks into my kitchen, hungry as hell.  "I want to add a little spice to my life." I'll give her that and plenty more. It's Saint Patrick's day. Everyone wants to have fun, to get lucky. Me? I want to give it to her good and then make her mine. Forever.

Forever His Girl by Alexx Andria

I knew the moment I saw her — she was meant to be mine. Except we are all wrong for each other. Complete opposites. I’m a widower and CEO of my own company in Dublin; she’s a California girl with sunshine in her heart and fire in her hair.  Our chemistry is off the charts, electric and dangerous. Her name tastes like sweetness in my mouth; her breathy sighs ignite my soul.  I want her like I’ve never wanted another human being and I’m going to make her mine.

I said I'd be forever true… My rock star life is lived out in full public view, but I've managed to keep a few secrets. Now my luck has run out. Unexpectedly confronted about my personal life in an interview, I have to choose – the truth or to lie? My relationship with Brigid is my best kept secret. Honesty means exposing Brigid to the prying eyes of the paparazzi. But lying means losing my girl forever…

My husband whisked me away to Ireland to celebrate our tenth wedding anniversary. What I didn't expect was the message he sent me by courier. The trip was filled with one twisted surprise after another and my body was used and abused for hours. I thought I had an idea what domination meant, but it turned out I had no idea until my husband decided I would be forever tied to him.