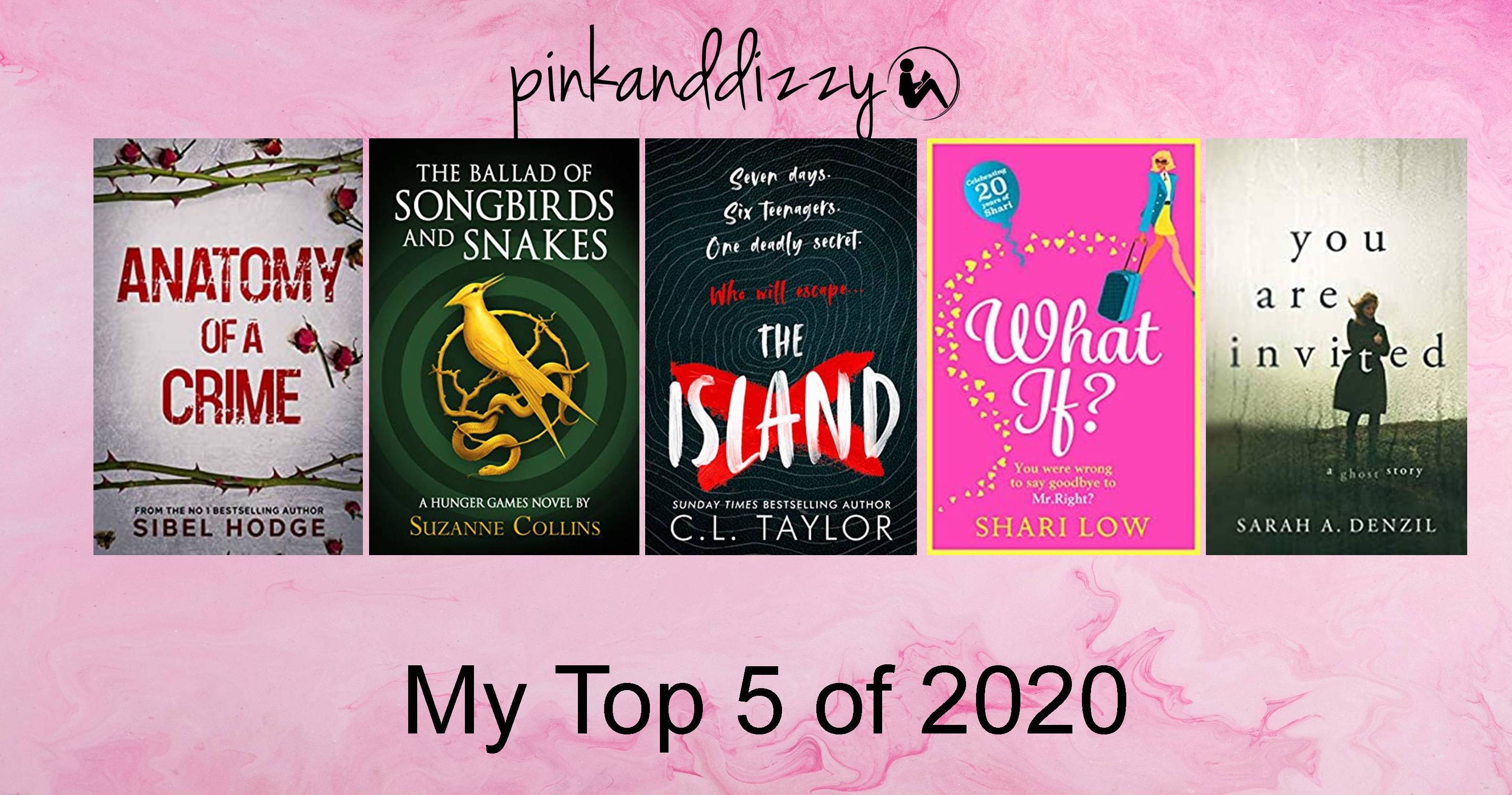 I’ve read a lot of good books this year, a lot of ok books and some terrible. It’s not been as good a year for reading; I’m not sure if I can blame COVID or my house move, but I’ve just found my mind wandering too much and I've not had the staying power that I had last year. I’m currently on book 158 and have about another ten to read. So, becasue I've read a lot of just ok books my top five really stood out. To make into my top read books they need to be ones that have stuck in my mind and blew me away more than just a five-star read. There were five clear winners for this!

So, my top five books of the year are:

Anatomy of a Crime

Anatomy of a Crime by Sibel Hodge

I read two books that were investigating a past crime, but this had such an unparalleled spin on it that it has stuck out. It was exciting and a unique and unforgettable read.

On the summer solstice in 2017, two girls walk into Blackleaf Forest. Only one comes out alive. Dubbed as the Sleeping Beauty Killer, and surrounded by rumours of witchcraft, Caris Kelly is sentenced to life in prison for murdering her best friend during a ritualistic thrill kill. Although Caris insists she is innocent, no one believes her. Then three years later, investigative journalist Lauren Taylor looks into the murder for her true crime podcast. She becomes convinced there's more to the flimsy witness testimony, sinister coincidences, and sensational press coverage and probes into the case. As prejudices are revealed, lies are uncovered, and secrets are blown wide open, a single question remains... is there really one truth about what happened that night? Or are there only different versions of the same story?

The Ballard of Songbirds and Snakes

The Ballard of Songbirds and Snakes by Suzanne Collins

I think this is the book that I remember the most from this year. It's been so long since I read the Hunger Games books but going back in time to see Snow as a youngster and how the games became what they were was intriguing. This felt like one of those epic books you read, not just a book to pass the time but one that will become a classic. I really hope this gets made into a film!

Ambition will fuel him. Competition will drive him. But power has its price. It is the morning of the reaping that will kick off the tenth annual Hunger Games. In the Capitol, eighteen-year-old Coriolanus Snow is preparing for his one shot at glory as a mentor in the Games. The once-mighty house of Snow has fallen on hard times, its fate hanging on the slender chance that Coriolanus will be able to outcharm, outwit, and outmaneuvre his fellow students to mentor the winning tribute. The odds are against him. He's been given the humiliating assignment of mentoring the female tribute from District 12, the lowest of the low. Their fates are now completely intertwined – every choice Coriolanus makes could lead to favour or failure, triumph or ruin. Inside the arena, it will be a fight to the death. Outside the arena, Coriolanus starts to feel for his doomed tribute... and must weigh his need to follow the rules against his desire to survive no matter what it takes.

The Island by C.L. Taylor

I like reading something a little different, and this was certainly that. It was a Young Adult book by one of my favourite authors, but I think it would suit any age group. Interesting premise and made me think for a long time afterwards.

Welcome to The Island. Where your worst fears are about to come true… It was supposed to be the perfect holiday: a week-long trip for six teenage friends on a remote tropical island. But when their guide dies of a stroke leaving them stranded, the trip of a lifetime turns into a nightmare. Because someone on the island knows each of the group’s worst fears. And one by one, they’re becoming a reality. Seven days in paradise. A deadly secret. Who will make it off the island alive?

What If? by Shari Low

I love Shari Low's books, and this is the most outstanding one for the year. I think as it was set back in 1999, it reminded me of a simpler time when the internet wasn't at our fingertips, and we had to reply on the post and phone calls! I'm very excited as I have an ARC of the follow-on to Carly's story. I just really hope it doesn't dash all the feel goods I got from this book if her happy ever after was wrong!

1999. Carly Cooper is 30, single, and after coming close to saying ‘I do’ to six different men, she’s wondering if she accidentally said ‘goodbye’ to Mr Right. So, Carly quits her job, her flat, her whole life and sets off on a quest to track down all the men she's ever loved. But there is a problem. Her ex-boyfriends are scattered all over the world and Carly lives in an era before the Internet and Smartphones. Her Mr Right must be out there, but can she find him? And what if he’s moved on from the ex-girlfriend who said goodbye?

You Are Invited by Sarah A. Denzil

I don't know what it was about this book, but it's just stayed with me for months after reading. It may be because it was so different from anything else I've read this year. Sarah A. Denzil has been really good to me this year, and I've read some fantastic books by her, but this one certainly came out on top!

When Cath receives her invitation to The Event--a monetised retreat for social media influencers--she can't believe her luck. Irene Jobert is the most famous influencer in the world, and now Cath will be one of the five participants chosen to stay with Irene in a renovated Transylvanian monastery. The catch? Their every move will be live-streamed to millions of people around the world. Patrons pay for constant access to their favourite social media stars: Irene, the model; Nathan, the gamer; Jules, the blogger; Daniel, the fitness guru; and Cath, the writer. Nestled halfway up a mountain, the five are isolated, with nothing but the internet to connect them to the world. That is, until eagle-eyed live-stream followers all around the globe notice a sixth participant. A dark figure lurking in the background. They thought they were alone. Perhaps they were wrong.