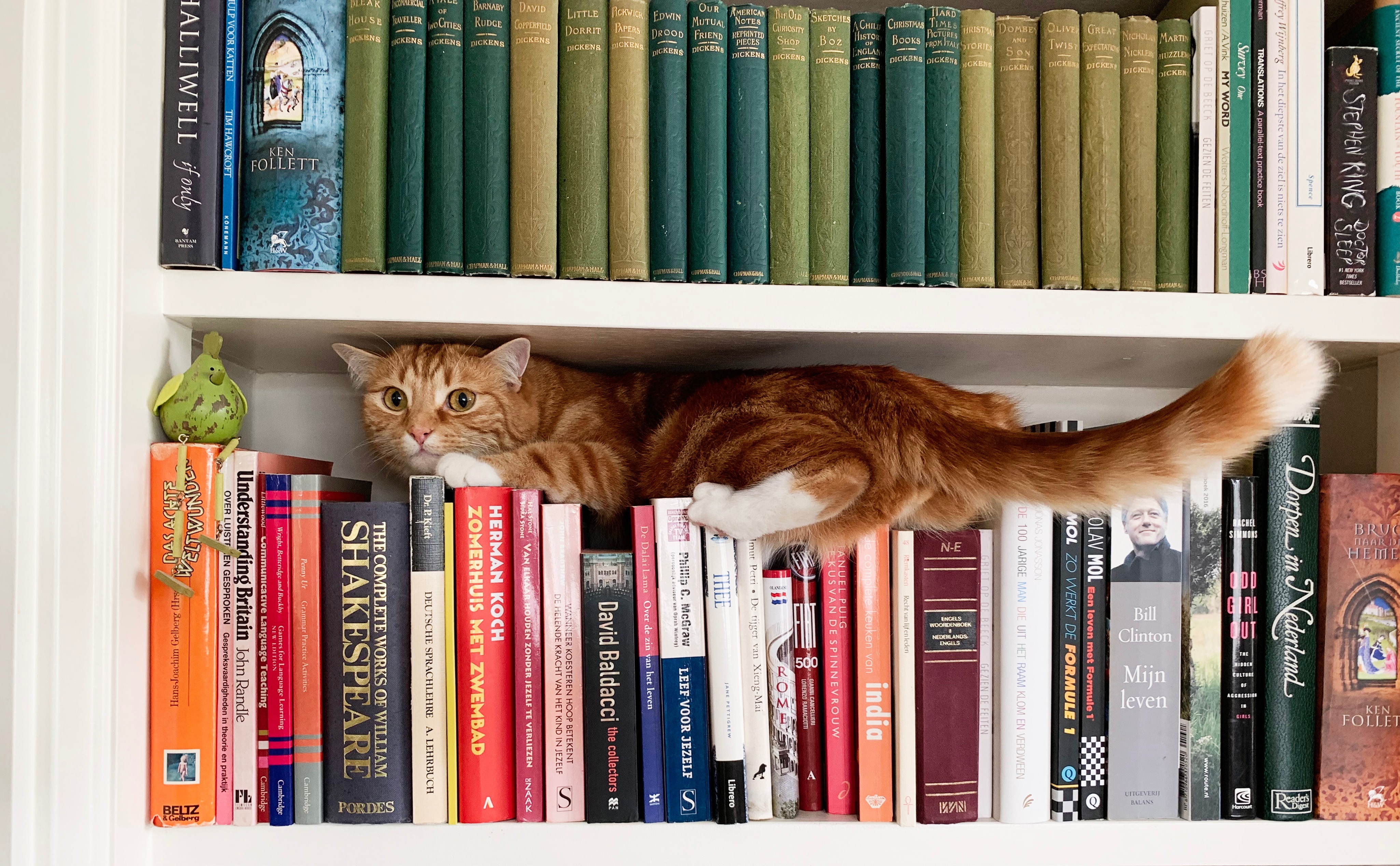 A book with a cat in it

I love reading books that have animals in them. Not necessarily books where it is written in the animal's voice but where they either have a predominant role or are there just slinking around in the background. The next Reading Challenge category is 'a book with a cat in it'. Anyone that knows me knows that I am obsessed with my baby cats, so I thought that this category was just fitting. It's not just any animal in a book but a cat. Some of the books I've recommended have a cat as a pet and is mentioned just now and again, but you know they are there, and they are essential to the main characters. Other books have a cat more in the foreground, and it is their story (but not necessary narrated by them). It was harder than I thought to find this list of books. Many of them don't advertise that they have a cat in. For example, my pick 'A Git from the Comfort Food Cafe'. It doesn't say in the blurb that it has a cat in it, but I follow the author on Facebook, and she announced before writing it that there would be a cat in it. She even ran a competition to name the cat, the unimaginative 'Tinkerbell' being the winner! So I hope you manage to find a book to your liking and you get to curl up either alone or with a furry friend to read this one!

A Gift from the Comfort Food Cafe

A Gift from the Comfort Food Cafe by Debbie Johnson

Christmas has never been Katie Seddon’s favourite time of year. Whilst everyone else shares memories of families coming together and festive number ones, the soundtrack to Katie’s childhood wasn’t quite so merry. But since she moved to the village of Budbury on the gorgeous Dorset coast, Katie and her baby son have found a new family. A family who have been brought together by life’s unexpected roads and the healing magic of a slice of cake and a cupful of kindess at the Comfort Food Café. This year, Katie’s new friends are determined to give her a Christmas to remember, and with a gorgeous newcomer in town, Katie’s Christmas wish for a happy home for her son might just come true.

The uplifting true story of an unlikely friendship between a man on the streets of Covent Garden and the ginger cat who adopts him and helps him heal his life. Now a major motion picture starring Luke Treadaway. When James Bowen found an injured, ginger street cat curled up in the hallway of his sheltered accommodation, he had no idea just how much his life was about to change. James was living hand to mouth on the streets of London and the last thing he needed was a pet. Yet James couldn't resist helping the strikingly intelligent tom cat, whom he quickly christened Bob. He slowly nursed Bob back to health and then sent the cat on his way, imagining he would never see him again. But Bob had other ideas. Soon the two were inseparable and their diverse, comic and occasionally dangerous adventures would transform both their lives, slowly healing the scars of each other's troubled pasts. A Street Cat Named Bob is a moving and uplifting story that will touch the heart of anyone who reads it.

On a drowsy afternoon by a riverbank, a young and distracted Alice follows a rabbit into a fantastical underground world that grows curiouser and curiouser. Dared, insulted, amused, and threatened by a succession of anthropomorphic creatures, the indomitable Alice falls deeper into a swirl of the imagination where logic has no place.

All Summer With You

All Summer With You by Beth Good

There's no place like home... Nursing a broken heart, Jennifer Bolitho retreats to Pixie Cottage. Her new landlord - a former soldier turned movie heartthrob - has grounds so large, she's sure the little house nestled in the woods will bring her solitude. Alex Delgardo also has reasons to hide away. Seeking refuge after a tragic incident turned his world upside down, he knows that the most important thing now is to care for his ailing family. But when Jennifer enters their lives, that changes. Because, as they both learn, you can't heal others until you learn to heal yourself...

Harry Potter and the Philosopher's Stone

Harry Potter and the Philosopher's Stone by J.K. Rowling

Harry Potter has never even heard of Hogwarts when the letters start dropping on the doormat at number four, Privet Drive. Addressed in green ink on yellowish parchment with a purple seal, they are swiftly confiscated by his grisly aunt and uncle. Then, on Harry's eleventh birthday, a great beetle-eyed giant of a man called Rubeus Hagrid bursts in with some astonishing news: Harry Potter is a wizard, and he has a place at Hogwarts School of Witchcraft and Wizardry. An incredible adventure is about to begin!

Life of Pi by Yann Martel

One boy, one boat, one tiger . . . After the tragic sinking of a cargo ship, a solitary lifeboat remains bobbing on the wild, blue Pacific. The only survivors from the wreck are a sixteen-year-old boy named Pi, a hyena, a zebra (with a broken leg), a female orang-utan - and a 450-pound Royal Bengal tiger. The scene is set for one of the most extraordinary and best-loved works of fiction in recent years.

The house looked right, felt right to Dr Louis Creed. Rambling, old, unsmart and comfortable. A place where the family could settle; the children grow and play and explore. The rolling hills and meadows of Maine seemed a world away from the fume-choked dangers of Chicago. Only the occasional big truck out on the two-lane highway, grinding up through the gears, hammering down the long gradients, growled out an intrusive threat. But behind the house and far away from the road: that was safe. Just a carefully cleared path up into the woods where generations of local children have processed with the solemn innocence of the young, taking with them their dear departed pets for burial. A sad place maybe, but safe. Surely a safe place. Not a place to seep into your dreams, to wake you, sweating with fear and foreboding.

The Hunger Games by Suzanne Collins

First in the ground-breaking HUNGER GAMES trilogy. Set in a dark vision of the near future, a terrifying reality TV show is taking place. Twelve boys and twelve girls are forced to appear in a live event called The Hunger Games. There is only one rule: kill or be killed. When sixteen-year-old Katniss Everdeen steps forward to take her younger sister's place in the games, she sees it as a death sentence. But Katniss has been close to death before. For her, survival is second nature.

It's not the journey that counts, but who's at your side. Nana is on a road trip, but he is not sure where he is going. All that matters is that he can sit beside his beloved owner Satoru in the front seat of his silver van. Satoru is keen to visit three old friends from his youth, though Nana doesn’t know why and Satoru won’t say. Set against the backdrop of Japan’s changing seasons and narrated with a rare gentleness and humour, Nana’s story explores the wonder and thrill of life’s unexpected detours. It is about the value of friendship and solitude, and knowing when to give and when to take. TRAVELLING CAT has already demonstrated its power to move thousands of readers with a message of kindness and truth. It shows, above all, how acts of love, both great and small, can transform our lives.

The Wild Road by Gabriel King

Behind the realm of man lie the wild roads. Weaving through time and space, these hidden pathways carry the natural energies – the spirits, the dreams – of the world. No creature can slip into the shadows and travel the wild roads better than the cat. For millennia, cats have patrolled the tangled paths, maintaining balance and order, guarding against corruption and chaos. It is dangerous territory: for those who control the wild roads hold the keys to the world. Amid a struggle between the purest good and the darkest evil, here are tales of duty and destiny, of courage and comradeship among the extraordinary creatures who brave the wild roads... Secure in a world of privilege and safety, Tag is happy with life as a house cat – until the dreams begin. Hazy dreams of strange pathways, of a mission he must undertake and of a terrible responsibility he will bear. Armed with the cryptic message, Tag must bring the King and Queen of cats to Tintagel before the spring equinox. Meanwhile, a man known only as the Alchemist doggedly hunts the Queen for his own ghastly ends. And if the Alchemist captures her, the world will never be safe again...