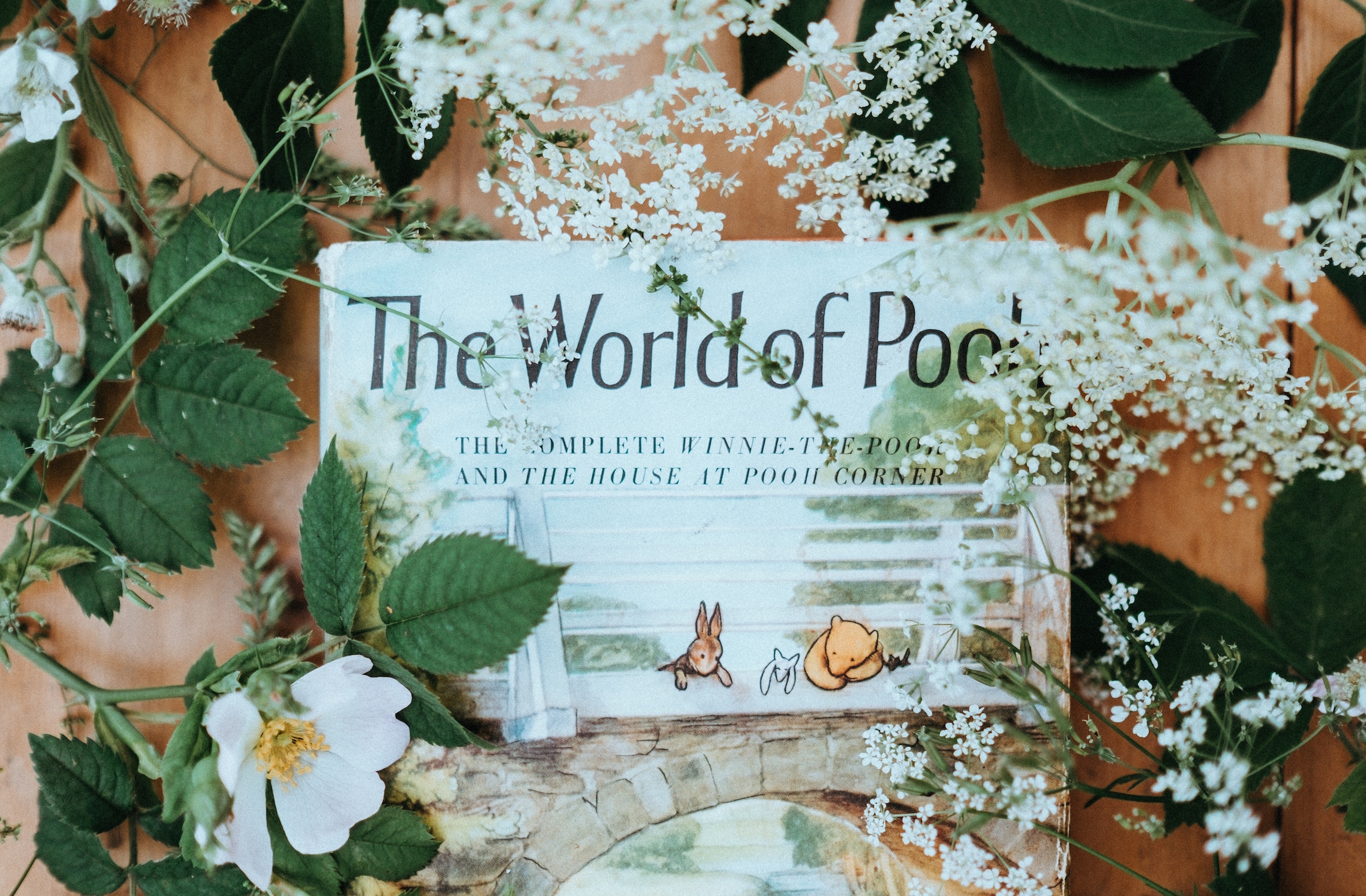 The first book of the 2019 Reading Challenge is a book intended for children. There have been a lot of books over time that were initially intended for children but that adults have enjoyed too. So, for this category, I felt spoilt for choice but settled on ‘Winnie The Pooh by A. A. Milne’. It’s going to be so nice to settle down into a book that isn’t too heavy and is meant for light reading.

For this category I have chosen ten books to inspire you, they range from books that were intended for small children like ‘The Enchanted Forest by Enid Blyton’ to the more grown-up Young adult fiction such as ‘Gone by Michael Grant’.

If you have any recommendations for this category, I would love to hear about them in the comments below.

I don't know why but I'm not a big fan of Alice in Wonderland. I'm not sure if it's the silliness of it and the fact she keeps getting into stupid situations that frustrates me, but I've never been a big fan even though it is iconic. I had to do lots of phonetic transcriptions when I started my masters of passages from the book; it drove me insane!

On a drowsy afternoon by a riverbank, a young and distracted Alice follows a rabbit into a fantastical underground world that grows curiouser and curiouser. Dared, insulted, amused, and threatened by a succession of anthropomorphic creatures, the indomitable Alice falls deeper into a swirl of the imagination where logic has no place. Referenced, resourced, analyzed, and embraced since its publication in 1865, Carroll’s masterpiece of the irrational has inspired such varied artists as Walt Disney, Marilyn Manson, Jerome Kern, James Joyce, and Tim Burton. It stands as one of the most extravagantly and ingeniously absurd works in the English language.

Love this series, well I've only read two books so far, but I'm chomping at the bit to read the rest! Read my reviews for books one and two here:

In the blink of an eye, everyone disappears. Gone. Except for the young. There are teens, but not one single adult. Just as suddenly, there are no phones, no internet, no television. No way to get help. And no way to figure out what's happened. Hunger threatens. Bullies rule. A sinister creature lurks. Animals are mutating. And the teens themselves are changing, developing new talents—unimaginable, dangerous, deadly powers—that grow stronger by the day. It's a terrifying new world. Sides are being chosen, a fight is shaping up. Townies against rich kids. Bullies against the weak. Powerful against powerless. And time is running out: on your birthday, you disappear just like everyone else. . . .

Harry Potter and the Philosopher's Stone

Harry Potter and the Philosopher's Stone​ by J.K. Rowling

Iconic books that most people have probably seen the film but may not have read the books. I will be recommending this series during the audiobook challenge but if you haven't read these books and want to give them a go I recommend the audiobook read by Stephen Fry. It's a real treat!

Harry Potter has never even heard of Hogwarts when the letters start dropping on the doormat at number four, Privet Drive. Addressed in green ink on yellowish parchment with a purple seal, they are swiftly confiscated by his grisly aunt and uncle. Then, on Harry's eleventh birthday, a great beetle-eyed giant of a man called Rubeus Hagrid bursts in with some astonishing news: Harry Potter is a wizard, and he has a place at Hogwarts School of Witchcraft and Wizardry. An incredible adventure is about to begin!

It was a toss-up between this and Winnie the Pooh. I've recently rewatched the film, and I am going this evening to watch the new one. I think I will try and find time for this series at some point this year, but I didn't want to commit to a whole series as part of this challenge.

When the East Wind blows Mary Poppins into the home of the banks children, their lives go topsy-turvy and are changed forever. More than eighty years since we first met Mary Poppins, this original, classic story is still charming readers and transporting new fans into the mysterious world of everyone’s favourite magical nanny.

This is about books a perfect topic for a reading challenge!

"So Matilda's strong young mind continued to grow, nurtured by the voices of all those authors who had sent their books out into the world like ships on the sea. These books gave Matilda a hopeful and comforting message: You are not alone." Matilda is the world's most famous bookworm, no thanks to her ghastly parents. Her father thinks she's a little scab. Her mother spends all afternoon playing bingo. And her headmistress, Miss Trunchbull? She's the worst of all. She's a big bully, who thinks all her pupils are rotten and locks them in the dreaded Chokey. Despite these beastly grownups trying to push her down, Matilda is an extraordinary girl with a magical mind. And she's had enough. So all the terrible adults had better watch out, because she's going to teach them a lesson they'll never forget!.

The Enchanted Wood by Enid Blyton

I've got fond memories of this from when I was a kid, so it's definitely on my TBR list to revisit the Faraway Tree!

The first magical story in the Faraway Tree series by one of the world's most popular children's authors, Enid Blyton. Joe, Beth and Frannie find the Enchanted Wood on the doorstep of their new home, and when they discover the Faraway Tree they fall into all sorts of adventures! Join them and their friends Moonface, Saucepan Man and Silky the fairy as they discover which new land is at the top of the Faraway Tree. Will it be the Land of Spells, the Land of Treats, or the Land of Do-As-You-Please? Come on an amazing adventure!

The Lion, the Witch and the Wardrobe

The Lion, the Witch and the Wardrobe​ by C. S. Lewis

Well, I never realised that this was book two of a series. I'm hoping it works as a stand-alone book, especially seeing as a film was made from this book. Let me know if the first book needs to be read first!

Narnia . . . a land frozen in eternal winter . . . a country waiting to be set free. Four adventurers step through a wardrobe door and into the land of Narnia, a land enslaved by the power of the White Witch. But when almost all hope is lost, the return of the Great Lion, Aslan, signals a great change . . . and a great sacrifice. The Lion, the Witch and the Wardrobe is the second book in C.S. Lewis’s The Chronicles of Narnia, a series that has become part of the canon of classic literature, drawing readers of all ages into a magical land with unforgettable characters for over fifty years. This is a stand-alone read, but if you would like to explore more of the Narnian realm, pick up The Horse and His Boy, the third book in The Chronicles of Narnia.

The Wind in the Willows

The Wind in the Willows by Kenneth Grahame

This book always used to creep me out when I was younger; I'm not sure why. It may have been the cover, but the feeling has always stayed with me, and I get shivers whenever it's mentioned!

Far from fading with time, Kenneth Grahame's classic tale of fantasy has attracted a growing audience in each generation. Rat, Mole, Badger and the preposterous Mr Toad (with his ‘Poop-poop-poop’ road-hogging new motor-car), have brought delight to many through the years with their odd adventures on and by the river, and at the imposing residence of Toad Hall.

Watership Down by Richard Adams

I saw the film for this when I was younger, but I've never read the book as far as I can remember! It's on the 100 book poster Morgan bought me so I will have to give it a go at some point!

Fiver, a young rabbit, is very worried. He senses something terrible is about to happen to the warren. His brother Hazel knows that his sixth sense is never wrong. So, there is nothing else for it. They must leave immediately. And so begins a long and perilous journey of a small band of rabbits in search of a safe home. Fiver's vision finally leads them to Watership Down, but here they face their most difficult challenge of all . . .

Winnie The Pooh by A.A. Milne

This is my pick for this challenge, so I will let you know how I get on in due course!

'Once upon a time, a very long time ago now, about last Friday, Winnie-the-Pooh lived in a forest all by himself under the name of Sanders' Curl up with a true children’s classic by reading A.A. Milne’s Winnie-the-Pooh. Winnie-the-Pooh may be a bear of very little brain, but thanks to his friends Piglet, Eeyore and, of course, Christopher Robin, he’s never far from an adventure. In this story Pooh gets into a tight place, nearly catches a Woozle and heads off on an ‘expotition’ to the North Pole with the other animals.